The Flooding of the Viktoria Plains is an expressiv fictional scenario withing miniature settings. It tells about a bus journey back to our origins. The young Ed Henkel is guiding tourists through the Victoria Plains before they are flooded forever. During the bus trip one of the travellers discovers his primeval longing for water.

From the birds-eye view it appears to be a religious procession in a medieval village. Altar boys in yellow garments carry flags and – what becomes apparent on the next closer take – they carry a glass coffin. But something seems strange. The windows have been blocked up, there are no attendees, everyone is afoot, carrying rucksacks, pulling along their belongings in handcarts or trolleys, and others even drag bulky chests. Meanwhile, in a hotel, a group of tourists is setting out to visit the plains of Victoria. The plains will soon be flooded as we happen to understand from an announcement. From behind we see a heavily breathing man all dressed in yellow standing at the window. Is he masturbating? No, he is addressing the agitated birds in a cage: “Alright, calm down! Calm down! I think you’re always excited!”

Through the bus windows we see the landscape passing by and the tour guide is providing the corresponding explanations. The tourists fantasize about how to make use of the area once it will have been flooded: diving in the glass houses or observing fish in coral reefs.

Learning about the past can be entertaining and serves as a pastime. Relics and ruins of ancient civilizations lavishly spread out in the landscape pass by. At the same time, we can observe typical, very familiar details of such a journey, such as a water bottle on the floor, rolling to and fro as in a thriller, rolling until banging into something, and finally being picked up. “Somebody has to do it.”

All the time, we come across enclosures – cases, cages, houses, the bus and the glass coffin. Later on it becomes apparent that they all share the same function. Looking outside, the yellow visitor’s own gaze is reflected in the windows as in the glass of an aquarium; the inside becomes the outside. It is always about rooms which contain something, something that is leading a separate life, set against the alluring indefinite outside. The yellow man is breathing ever more heavily. However, this does not seem to be caused by travel-sickness: “I can’t look out. It only makes me feel worse.” Little by little we understand that he is at the transition between two spaces/situations. Like a lizard which outgrows its skin, waiting to finally shed it. The foreboding of the coming cannot be guessed and is only perceptible through the feeling of uneasiness. The other passengers, on the contrary, still in their habitual state of mind, look through the window at the residents of the Victoria plains performing their daily activities: “They’re taking the last of their wood to the dam, where it’s to be made into furniture.” – “Did nobody tell them?”.

Random snippets of conversation pervade the film and illustrate how distant the tourists are from what is happening outside. “Interestingly, the inhabitants won’t have time to watch the event.” – “There must be a reason for that.”  They are ordered by the bus driver’s instructions “Henkel, stop talking so much.” – “Bring the fruit out now!” Then, it is time to smoke a cigarette and enjoy it with Caribbean music. The behaviour of the group inside the bus is determined by the mental hindrance of the passengers. This forms a perspective, the vanishing point of which is situated outside in a conceived landscape. Towards both past and future, it is filled with the tourists’ present way of thinking. Being submitted to an easy reading and a projected vision, the landscape does not relate to reality. Neither the inside of the bus nor the activity of the inhabitants of the Victoria plains could penetrate the visitors’ consciousness.

Then some problems begin to emerge… As the tunnel is blocked, the party is obliged to make a detour through the mountains in order to watch the flooding from the dam. Time gets tight and the danger is played down, “Think of something to say to keep them happy.” Again, we encounter the procession, this time watched from the bus window: “Oh god, they’re celebrating the evacuation!” – “Oh, a waterproof coffin”! At this point, the perception changes for the first time and reality is understood by the group. The usually jolly tour guide unintentionally bursts out, “Deserted wilderness, dramatic natural scenery … Europe is ending, an endless view …” However, he is immediately put down by the bus driver: “Henkel, this is getting embarrassing… Take a break!”

The yellow man takes advantage of the situation: “I must say something to everyone!” His words perforate the enclosure of the moving observation deck. “I want to drive towards the water. It is not a threat, it’s a reward. The reward of our life, we’ll be returning to our origins…” His speech seems to provoke a disaster; after a tussle with the driver, the vehicle breaks through the guard railing and dashes towards the precipice.

The underlying logic of the film, which knows neither cause nor effect, continues. Landed on the plains of Victoria – none of the tourists being injured – a cheerful, leisurely behaviour occurs and, as is usual for day-travellers, the angling gear is unpacked, berries picked, the landscape admired and the body stretched. Meanwhile, the fatally-injured tour guide is dying. A child plays hide-and-seek close to the tied up yellow man while his mother remains entirely disinterested: “He really wanted to go there, so I let him… The baby is so quiet by him.” Finally, the yellow man manages to loosen the rope, rush towards the water, dive into the waning freak wave and cavort happily in his new element.

ULU BRAUN mobilised a number of collaborators and assistants during the two years of filming Die Flutung von Viktoria. Every detail of the characters as well as the scenes is hand made and every movement is shot in real time. An even more minimalist animation is hardly imaginable; it is very much in line with the concept of film. Only camera angle and cut, dialog and plot are the cinematographic techniques applied. This radical approach of real-time shooting, the accessories made without image editing, as well as the effects realised without any post-production, all follow one of the basic concepts of contemporary art, the collage. The material is used in an improvised manner and stems from the vocabulary of installations; the juxtaposition of non-related media shapes and determines the framework of the film. Therefore, the end-result could be seen as an animated installation.

In many ways, the film recalls Professione: reporter, directed by MICHELANGELO ANTONIONI in 1975, the year of the independence of the Portuguese colonies in Africa and the RAF trials. A reporter meets a man in a desert city who apparently has seen a lot and is leading an exciting life. The next day, the man is dead. The reporter switches identities with the man and thus plunges into the latter’s world. The reporter’s wife goes about searching for him and for the circumstances of his death, and sifts through his past works. In a film interview, a man talks to the camera lens: “Your questions tell more about yourself than I could give answers myself”, without further ado he rotates the camera around and turns the reporter into the interviewee.

In ANTONIONI’s film, the reporter is caught longing for the new, analogous to the yellow man who pushes for a life outside socially accepted norms of imagination. He dives into the new without properly reflecting. The cage scene in the beginning makes reference to the legendary sequence in Professione: reporter when the camera follows the reporter’s gaze outside the bars of the window grill, to rotate around its own axis. ULU BRAUN’s camera follows the same movements, makes us look at ourselves and, therefore, guides our train of thought,  by reversing the inside and the outside, into the unknown.

a video by Ulu Braun
written by: Ulu Braun in collaboration with Jacques Palminger, Alexej Tchernyi 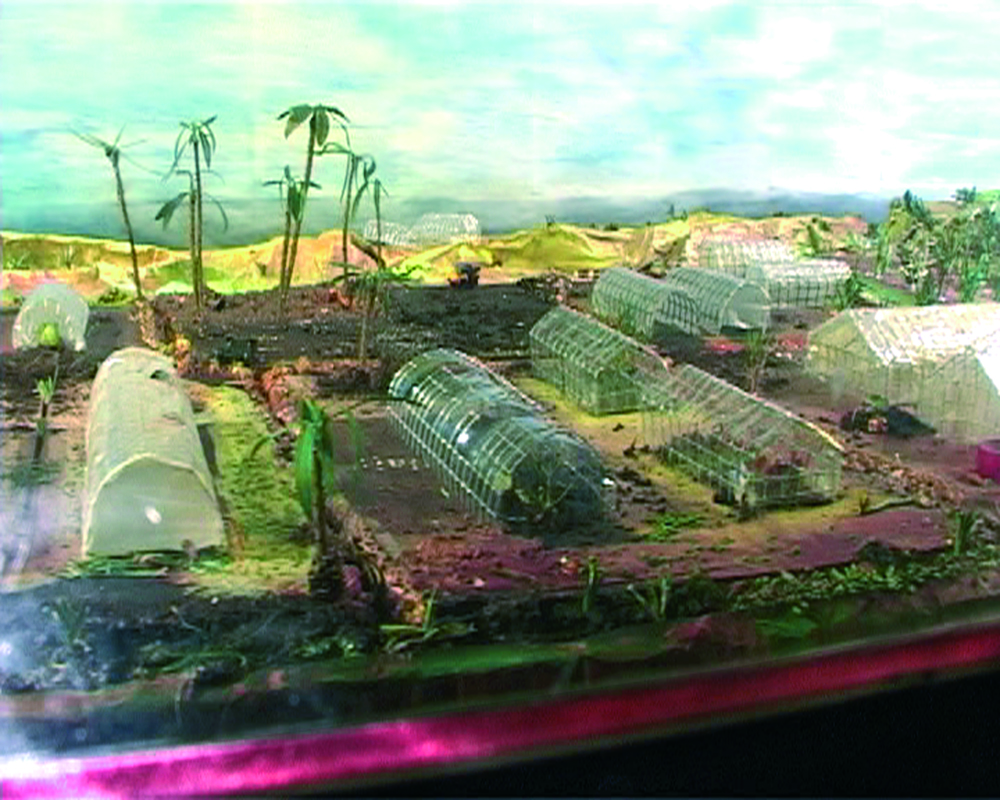 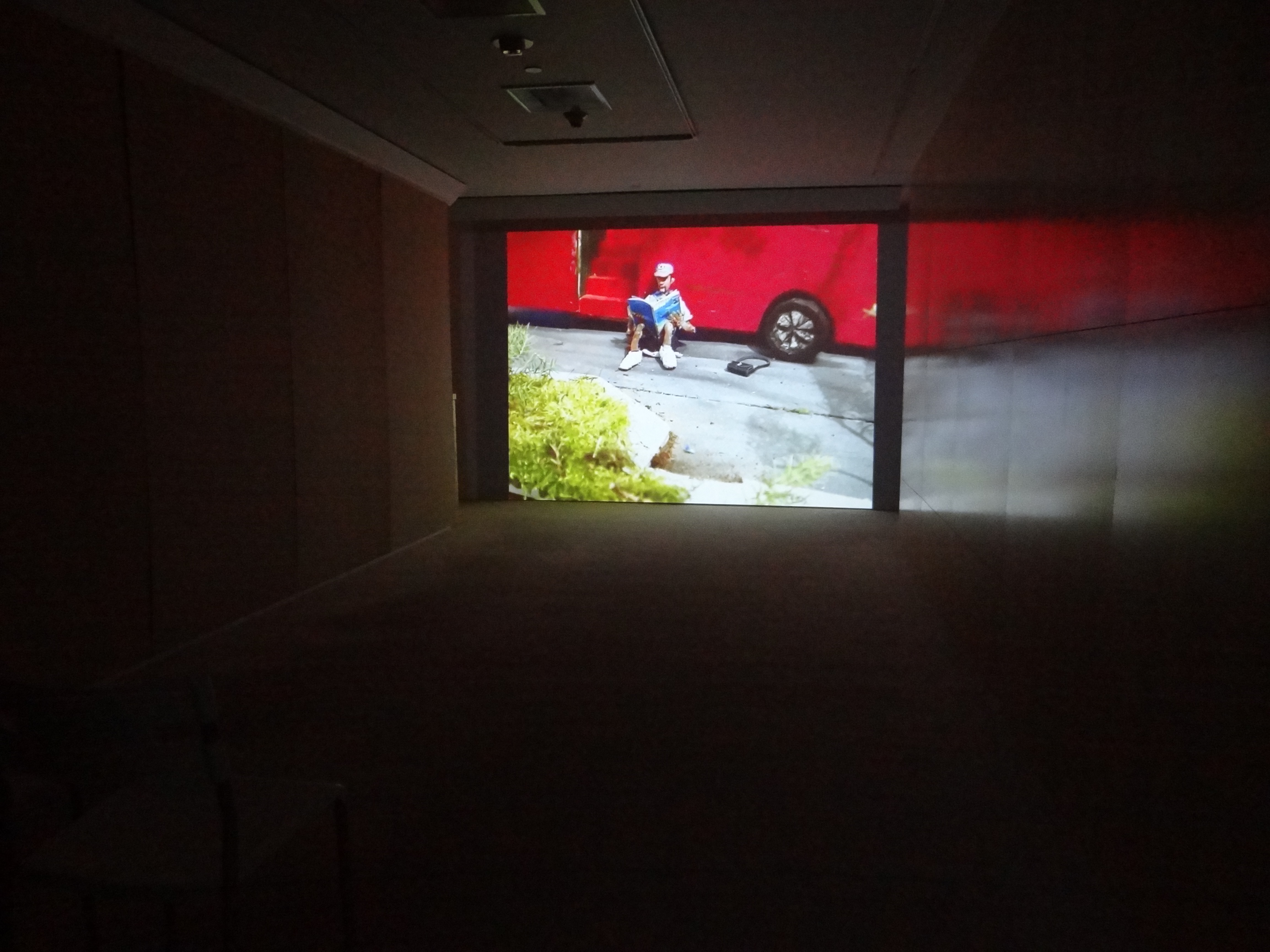 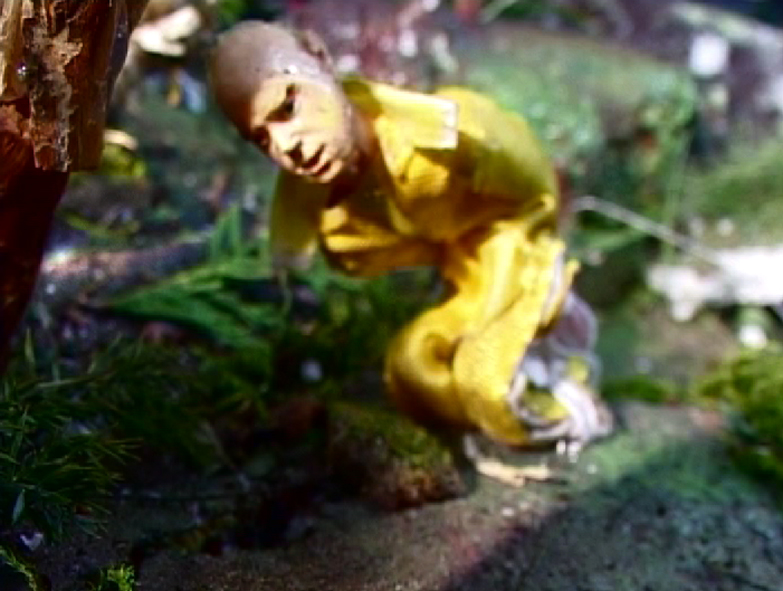 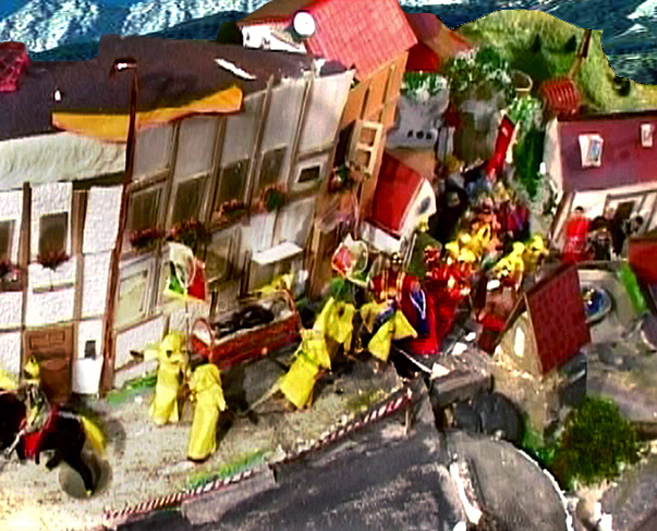